The interior shot and its elements are finished, I am currently working out the render passes so I can just concentrate on the animation. It will something subtle just appearing by the door and running away when the dog is ushered out of the scene. To show companies what sort of skills you have and also compositing everything was great and I am pleased that I am showing all the different passes that are need to create VFX and integrate it into live action footage. This is a rough template for the finished render and the template for my other two shots. There is some pacing issues and I would like to hold the wipes for longer, so the viewer can clearly see the passes.

After a long time working on the master shot, I have finally moved onto something new. Although I have been back and forth with tweaking the shot to iron out a few of the flaws. The new shot is an interior which is great change of pace and completely different. It's main advantage is that the shot is around 6-7 seconds instead of the massive 50 second master shot. This has been a godsend when using PF Track as previewing track points and solving is much faster and has allowed me to try new things and get results quicker and therefore I have been able to explore the software.

For this shot I wanted to create something that was real but simple, I opted for lots of wooden beams to hide the main areas where the set ended and added the start of a small staircase in the back right of the shot. I wanted to try and create a larger world scenario and make it looked like it was lived in. So far I have only added in the colour maps and the lights, I plan to use the specular maps and bump maps to give the wood a little more reality and presence in the shot. The Duke will also make an appearance as the main reason for the shot is that Abigail (Production designer) shews out a 'invisible' animal and as there is a dog in the master shot, I will composit the Duke into the shot. 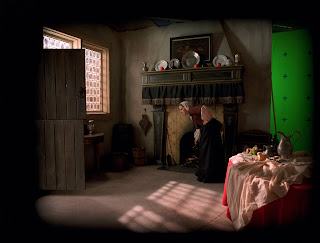 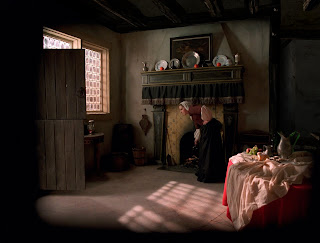 The above shot is my work in progress so far and its beginning to turn out the way I wanted it. I have still have work to do to make sure that there is sufficient shadow around the beams, although I think that I can get that from the occlusion pass. I am pleased with how the lighting is match the original plate and that it is given a realistic look to the beams.
Posted by SJJWalsh at 23:18:00