The Cycle of Art

On my way to work this week there was a poster in the London Underground, it was for a video game that had an upcoming release. I knew instantly what the game was because of the creature on the poster. It was for a 'Aliens: Colonial Marines' and judging from the poster it focuses heavily on James Cameron's - Aliens.

The reason for the post is that the poster was setting the game up well but the main thing about it was that it mirrored a shot I had designed for Conway (our NFTS SFX film) and the reason I thought that it was great was that I had based lot's of the shots and drew the storyboard with 'Aliens' in mind. So to see a new game using a poster that referenced a shot from Conway which intern came from Aliens was proof that art indeed does imitate art.

Here are the images to compare: 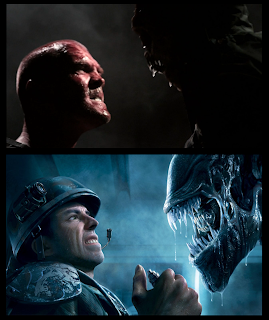 Both shots are almost a carbon copy of each other, the smoke in background, the goo dripping from the mouths of the alien and the power angle.

Here is a the 'Conway' trailer that affectionately sends up 'Aliens'